Just this week I was reading that JD Salinger's narrator in Catcher in the Rye is supposed to have said that a good book is one that makes you want to talk to the author on the phone. Well, here is the 21st century version of that - an email intervew. I am so pleased that Chika Unigwe, author of On Black Sisters Street so generously agreed to be my first ever interviewee, following our discussion of her book at the Black Reading Group's January meeting.  It has been a real pleasure to put this together with her and I am sure that you will enjoy her responses which are both thoughtful and positive. Also, we seem to have outed' ourselves as ABBA fans! 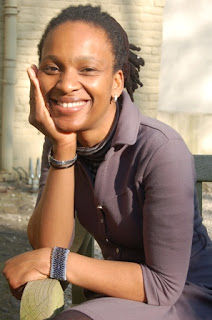 We were really taken by your book, totally drawn into the lives of the women whose stories you chose to tell. What inspired you to follow this theme?
First of all, thank you very much for your interest in my book. I struggled for a long time with the idea of writing as a career and comments like yours validate my choice. Thank you.
One of the greatest cultural shocks I had was seeing half dressed girls in display windows waiting for customers. I became intrigued when I heard that many of the African prostitutes in Antwerp were from Nigeria (mainly from Benin City). I wanted to know why anyone would come that far to feed the sex industry here.
How long did On Black Sisters’ Street take you to write?
About two and a half years and fourteen re-writes. I was
relieved when it was done as it was a very hard book to write. Hard in the sense that it took a lot from me, emotionally. But writing it, researching it, has changed me fundamentally and I am grateful for that.
Tell us about the research that you did and how long did it take?
I went to the red light district dressed in a mini skirt and high boots with killer heels, dragging my husband for safety with me. I went to a bar called 't Keteltje where many illegal Nigerian prostitutes work out of. It's pretty much like the 't Teepotje of my novel. I also talked to the prostitutes who worked behind display windows.
Do you see any of the women who told you their story? What do they think of the book?
No. It's a bit selfish but I went primarily to get fodder for my novel and not to establish any sort of relationship. These women also, while they are friendly are proprietorial about their emotional/private space. They would not give me their phone numbers, for instance. But I hope that if any of them reads my book that they'd recognise a certain sense of empathy in the way the narrative is told and in the way the women are portrayed.
Which character did you identify with the most?
Ama. Probably because she grew up in Enugu, same as I did. And she loves ABBA (I think).
Can relate to that – whenever I hear their songs, I am totally surprised at how I have come to know all the words. 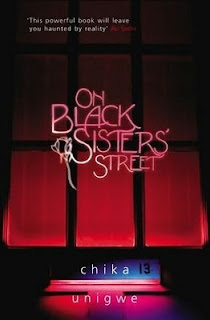 Not many novelists would wander around the seedy red-light district of Antwerp in a mini-skirt and thigh-high boots to carry out research. But this is what Nigerian writer Chika Unigwe did for her novel about the lives of African sex workers in the Belgian city. She also spent time persuading these women to share their stories.

Her diligence has paid off. On Black Sisters' Street is a probing and unsettling exploration of the many factors that lead African women into prostitution in Europe, and it pulls no punches about the sordid nature of the job. Four naive young women, Sisi, Joyce, Ama and Efe, fall under the money-making spell of pimp-daddy "Senghor Dele" in Lagos.

Rich, vulgar, ruthless, he specialises in exporting girls to work in Belgium for a modest fee of 30,000 euros. This they must pay back in monthly instalments over many years of turning tricks ten hours a day. They don't all know that this is what lies in store but, fake passports withheld, the consequences for those who try to escape are dire.

Sisi, around whom most of the novel's suspense revolves, is an ambitious graduate unable to find suitable work. Efe is a teenage mother struggling to raise her son with no support from his father. Ama has escaped an abusive childhood only to find her dream of escaping Nigeria crushed by a dead-end job. Joyce, without family, home or money, is abandoned by her boyfriend. The women's dreams come in different sizes, from financial support for struggling relatives back home to the allure of big houses, fancy cars, gold jewellery and expensive plait extensions.

Unigwe's vigorous prose is at its best when describing the utter humiliation Sisi feels when forced to dress like a hooker in "a gold-coloured nylon skirt" that rode up her legs when she walked and "showed her butt cheeks when she bent". So too with the degradation of her first encounter with a client in a toilet: "She baptised herself into it with tears, hot and livid, down her cheeks, salty in her mouth, feeling intense pain wherever he touched, like he was searing her with a razor blade that had just come off a fire".

Men in this novel are generally drunks, murderers, rapists, weak, cold-hearted, pathetic - although Unigwe avoids the fallacy of women as passive victims. Hers make choices, for which there are consequences. But their choices are restricted by circumstance and the Lagos they leave behind is a harsh place to survive, where "on any given day one was likely to find a corpse abandoned by the roadside".

She shows what the women become, too. Sisi, who felt she was living the dream on her first day in Belgium because she was eating jam, can "no longer bear to look at herself", while Efe's plan is to run her own brothel one day when she has paid of her debt. What Unigwe does brilliantly is to delve into the psychology of each woman, eliciting different levels of empathy.

This is an important and accomplished novel that leaves a strong aftertaste. Unigwe gives voice to those who are voiceless, fleshes out the stories of those who offer themselves as meat for sale, and bestows dignity on those who are stripped off it.

On Black Sisters’ Street - A Review by Ikhide R. Ikheloa

Ikhide R. Ikheloa has written some of the most popular articles on this website and the Internet today under his pseudonym "Nnamdi." Ikheloa who calls his writings "moonlighting" also writes poetry.

Chika Unigwe’s book, On Black Sisters’ Street chronicles the sad odyssey of an army of young women prostitutes drawn from various parts of Nigeria (and the Sudan!) who invade Europe desperate to do for themselves and their clans what waves of prostitute African governments have neglected to do for them. The ladies, Efe, Ama, Sisi, and Joyce are the main characters in a set of stories that collectively narrate epic struggles in the face of fear and despair. In this well-researched book, Sisi leads this pack of warrior-sisters on the streets of Europe determined to force down the doors of poverty and hopelessness that forced them away from home. They go out daily in search of lonely men - and wealth, the new measure of respect back home in Nigeria.

There is plenty to like in the book. It is rich with environment, populated by colorful, pleasant details that do not overwhelm the senses. It is a book that will take you a few days to read – the prose is languid, seemingly in no hurry to get to a climax. I like the way Unigwe introduces side issues into conversations and they stick with you – issues like sexism and the treatment of women as chattel in Africa. It is a neat trick, how she tucks weighty issues into throw-away sentences.Every character in this book is driven by a deep hunger. Perhaps the monotony of yearning is the story of a Nigeria gradually turning soulless from material lust. In the process, we have learnt to hate ourselves. Energy seems reserved for mimicking the otherness that resides in the West. Unigwe’s book showcases Nigeria as a nation of people deeply invested in acquiring the trappings of an otherness that emanates from the West.God must be exhausted and Nigerians are to blame. The book captures the ceaseless supplications for more and more and the pious request for God to annihilate our enemies that stand in the way of our more and more. God must regret the day the devil tricked her into creating the Nigerian; we are such a needy group. We see the new Christianity as the new plague sweeping across a nation of uncritical thinkers.The absurdities of life in Nigeria are expertly captured. Lagos is filth and dust at dusk advertising the meanness of neglect: The chapter named Ama was the best. It hearkens to the beauty of Chinua Achebe’sThings Fall Apart, of what happens when language is not in the way of the story. Here, Unigwe writes with confidence and her literary muscle barrels her voice into a full-throated roar. The expert way she weaves local Igbo and onomatopoeic idioms into the English is sexy, kpom kwem.The book offers plenty to frustrate the reader. The prose is uneven overall; as a result the book sometimes has the consistency of pulp fiction. The use of Pidgin English in this book added nothing to the book. Unigwe’s knowledge of Pidgin English seemed tentative or perhaps watered down to make it more palatable to a broader market. Pidgin English has an image problem. In the hands of Nigerian writers it undergoes an extreme makeover and acquires an inferiority complex.The book’s chapters are not numbered; they are repeatedly named after each “sister” or the street Zwartezusterstraat. There are about thirteen chapters named Sisi. Confusing. The chapters see-saw between multiple consciousnesses; the reader is force-fed the future up front and in the next chapter, the past walks up to the day. The reader learns of the future death of one of the characters – on the first few pages of the book.The book is not quite convincing in its analysis of how the girls chose prostitution. It is not for lack of trying. Indeed, Unigwe is guilty of an over-analysis of the characters’ motives. She obviously interviewed a lot of prostitutes. One wonders if they held back from this sister who went to too much school.The plight of Nigerian girls in Europe is the most visible symbol of the wanton rape of generations of youths by badly behaving Nigerian rulers. Unigwe appears however to have no stomach for conflict. Europe harbors a huge contingent of ladies from Edo State in Nigeria. There seems to have been a deliberate attempt to avoid this reality.  The chapter namedAlek (Joyce) is my least favorite. It reads like an exhausted affirmative action afterthought. The character was developed as coming from Sudan, escaping the war, ending up in Nigeria and then Europe after her soldier-lover got bored with her. Darfur does not belong in this book. The chapter sits like a patronizing ode to the notion that prostitution is universal. On Black Sisters’ Street is a good story fiercely resisting flight because it is airborne on timid wings. This is a shame because Unigwe has the muscle to communicate proprietary feelings using Standard English. My humble advice is that Unigwe should relax and take maximum advantage of her mastery of loose limber prose and let the words fly recklessly with her imagination. That would be quite a book.
>via: http://www.africanwriter.com/articles/470/1/On-Black-Sisters-Street---A-Review-by-Ikhide-R-Ikheloa/Page1.html