Old School As Told by

We’ve been told that pictures are worth a thousand words but Awol Erizku, tells us something else. This native New Yorker shows us his studio, his unique images, his point of view and a whole lot words that won’t fit even in a thousand photographs.

two + seven: Tell me a little bit about yourself, how did it all start?

Awol Erizku: I’ve always had an interest in film in high school. I got into Cooper Union because of my film but when I started college I had an opportunity to intern for David La Chapelle. I showed him a series of photographs of this group of retro kids. He was blown, he made me realize maybe making art with photography was something I can take more seriously. I opened this studio last Halloween.  The owners of Adore Flower shop Jack Wu and his beautiful wife Chiyomi  have been impressed by a wall installation my good friend Fletcher Williams III and myself have been commissioned to complete that summer on Jacks bar on 53rd street .

We took a good portion of that summer to work on the wall by night, we believe it’s the sexiest wall in all of New York City clubs. Shortly After the summer I graduated from Cooper, Jack and Chiyomi who recently moved in to the Flower Shop generously gave me the floor below the Shop to use as my Studio. From there I had to start doing the things you don’t learn in school: building my studio one equipment at a time, producing work and getting into shows and galleries.

two + seven: How would you describe your work?

two + seven: What’s the predominant theme of you work?

AE: I’m still working on it but I would say a lot of it has to do with Identity, Beauty and Humor. I want to create substantial work that represents my culture in a positive light; I want to celebrate the elegance and the beauty of African American Men and women. Pop-culture has a lot of influence on my work. I like to re-contextualize art historical pieces with a twist of pop.  You won’t think the same artist would make my photos and sculptures. Think of a huge puzzle, I’m putting the pieces that someone will consider the “theme” of my work once I’m gone, together.

Girl with a Bamboo Earring by Awol Erizku

Lady with Pitbull by Awol Erizku

two + seven:  Tell us about your work

AE: My neon piece You Are All Famous, is definitely more contemporary and it’s a bit different from my photographs like The Girl with a Bamboo Earring. My neon piece of Barack Obama’s twitter name (@BarackObama) highlights his relevance in pop-culture, our generation and Obama as the first American president to be branded.

two + seven: What is your work process?

AE: It starts intuitively on a conceptual level and then I create a surface. I think about what I want to say and then find the medium and material that can best communicate my concept. For photography, there’s more patience involved, for example finding the subject and scheduling a shoot and so on. Once I’m making the photograph with my subjects, it’s organic but the ideation of my work comes in time. For any given piece, I would be looking at up to 5 subjects. These subjects are people that I come across in my day-to-day adventures in the city. It’s important for me to come across these people and get to know them and see if their persona fits the concept I want to portray. Music also plays a huge role during my shoots. I usually have a playlist set up before each shoot. If I’m not shooting, I’m making playlists.

two + seven: Who are the biggest influences in your work?

AE: On the conceptual level, Jeff Wall, in how he uses back-lit photography to add more to his photographs. David La Chapelle has a huge influence on the visual side of my work, color and making sure the smallest details get the same treatment as the rest of the photographs. At about 18 or so David was my mentor who exposed me to A-list celebrities and how to work with them, I apply a lot of those aspects when I photograph my subjects. But if I can be honest, I avoid looking at other photographer’s work because I don’t want to have a direct influence on the aesthetic or concepts of my work. Photography is saturated! 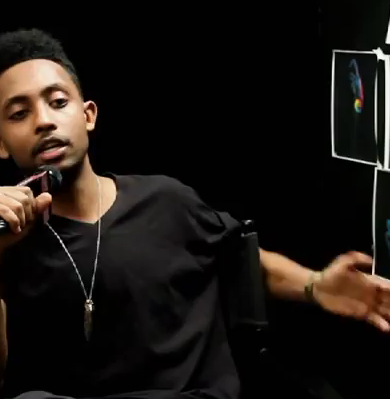 A Day With Awol Erizku

One of our favorite New York City artist and photographers, Awol Erizku recently sat down withBlowhiphop TV to talk about his come up and passion in his artistry. Young and independent, Awol is one of the most underrated in the concrete jungle. Little do people know he is responsible for shooting A$AP Rocky & A$AP Ferg‘s first music video “Get High” as well as shooting a video for The Suzan. Amongst his amazing photo work and art installations, his creative direction is just as awesome. He has two art shows coming up this year that you will read about on here, you don’t want to miss them so make sure you look out for those. This interview below takes you on a day with Awol as he shows you his process of creating and also some of his hobbies. Enjoy the few words with Awol.