The author Walter Mosley specializes in his own kind of flawed Everyman: easy to underestimate, easy to overlook, like the title character from his allegorical 2008 novel, “The Tempest Tales.” But a new spotlight will fall on Tempest Landry and the other characters from the book as they wrestle with big questions about perceptions of good and evil in Mr. Mosley’s first play, “The Fall of Heaven,” which opens on Thursday at the Cincinnati Playhouse in the Park.

Skip to next paragraph
Enlarge This Image 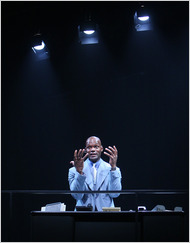 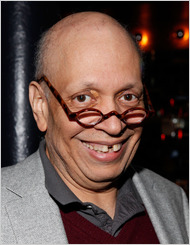 Mr. Mosley, whose play, “The Fall of Heaven,” was adapted from his “Tempest Tales.” 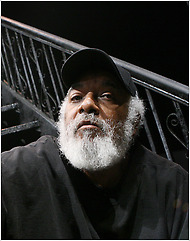 The play's director, Marion McClinton, on the set of “The Fall of Heaven” at the Cincinnati Playhouse in the Park.

A 58-year-old New Yorker best known for his Easy Rawlins mysteries like “Devil in a Blue Dress,” Mr. Mosley has written dozens of books (including science fiction), short stories and essays on race and politics. The play is an adaptation of “Tempest Tales.” His foray into the theater isn’t so surprising. “My writing is kind of made for people to speak,” he said.

Discussing “Fall of Heaven” by telephone a few days before previews began, he explained that the theater setting was “a way to make the work deeper.”

“Having the story up there onstage meant I could get that many more insights, from the director or the actors,” he said, not to mention the dimensions added by lighting and audience response.

In the play and the novel, Tempest (Leland Gantt), a ne’er-do-well from Harlem, is minding his own business when he is felled by 17 police bullets, his MP3 player mistaken for a gun. St. Peter (Anthony Marble) sentences him to hell, citing a life of petty crimes and other transgressions.

Tempest disputes that judgment, arguing that he bent the rules to survive and made ethical choices, at least based on the situation. He gets a second chance by being sent back to earth in another body, guided by an angel named Joshua (Esau Pritchett). If he does not admit his sins (and go to hell), Joshua warns, heaven will fall and allow the Devil, who’s named Basil Bob (Anthony Marble), to reign supreme.

“In ‘Tempest’ and ‘Heaven’ I do what I have often done, which is take a very pedestrian black male character and put him at the nexus point of these gigantic questions about good and evil and the meaning of life,” Mr. Mosley said with glee. Tempest Landry, through no fault of his own, has to take on heaven and hell and decide the fate of humankind. That makes him a hero, Mr. Mosley said, adding that he is one of just a few writers who turn ordinary black men into heroes.

“The black man in America has a bad reputation,” Mr. Mosley said. “It’s this one-note kind of thing. There is a lot of depth to most people in the world, black men included.”

So when Basil Bob (in a white body) asks Tempest if he fears him, Tempest replies: “Fear? Let me tell you somethin’ brother. I’m a black man in America. I know fear better than Amos knew Andy.”

Mr. Mosley said, “The biggest challenge for me in doing this was leaving things out.” He tapped out the play in a few weeks but said that writing it was a bigger challenge than a novel. For starters, onstage “you have to hold the audience’s attention for two hours or more,” he said, “with people talking at you,” as opposed to a novel, where readers go at their own pace.

When he sought to switch mediums, Mr. Mosley reached out to the director Marion McClinton, best known for his work on the plays of August Wilson. Mr. Mosley is a fan of Wilson’s. Some people thought they looked alike, he said, and would do things like congratulate him for Wilson’s play “Ma Rainey’s Black Bottom” and tell Wilson how they liked “Devil in a Blue Dress,” Mr. Mosley’s novel.

It turned out that Mr. McClinton knew a bit about angels and devils because of his Roman Catholic background, which helped Mr. Mosley, an agnostic, refine the drama’s arc. Mr. Mosley “has a way of making the common and the regular seem infinite and epic,” Mr. McClinton said in a telephone interview from Cincinnati. His conversations with Mr. Mosley — he approaches directing by learning how the playwright thinks — showed him to be “one of those artists who didn’t see it as a disadvantage but an advantage to being who he is and where’s he’s from,” said Mr. McClinton, who was nominated for a Tony for directing the Broadway production of Wilson’s “King Hedley II.”

He found that it was a task to keep the action flowing in a two-act play with a lot of scenes, depicting heaven and Harlem and many other places. (The set designer is David Gallo, who won a Tony for scenic design in 2006 for “The Drowsy Chaperone.”) Because of technical difficulties, the first preview, scheduled for Saturday, was canceled. Still, there are advantages to a theatrical adaptation, like having a character suddenly turn into someone else, which wouldn’t work as well in a novel, Mr. McClinton said.

Ed Stern, the producing artistic director for the Cincinnati Playhouse in the Park, said he jumped at the chance to produce “Heaven” because it was unlike anything he had ever seen onstage.

“That kind of hip, quirky, street-smart character that Walter Mosley creates is a new voice for the American theater,” Mr. Stern said. “He doesn’t need us. We need him.”

Mr. Mosley, though, said he had always adored the intensity of theater and looked forward to having new work produced. Ever prolific, he will publish his latest mystery novel, “Known to Evil,” featuring his new hero, Leonid McGill, in March; he has also written two plays. One is about a habitual liar; the other is about two people stuck in an elevator.

“This has been a great deal of fun,” Mr. Mosley said of his Cincinnati adventure. “I feel very satisfied. As a writer, I want to extend my range as far as possible.”

Sign in to Recommend More Articles in Theater » A version of this article appeared in print on January 27, 2010, on page C4 of the New York edition.