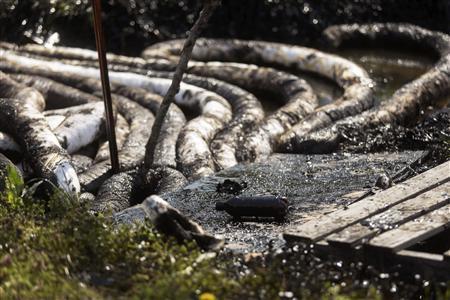 (Reuters) - Exxon Mobil on Sunday continued cleanup of a pipeline spill that spewed thousands of barrels of heavy Canadian crude in Arkansas as opponents of oil sands development latched on to the incident to attack plans to build the Keystone XL line. 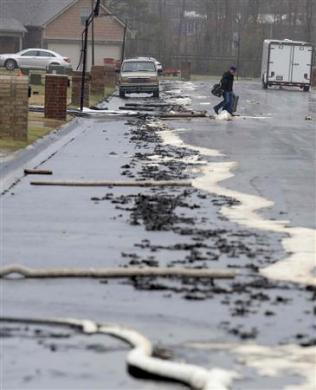 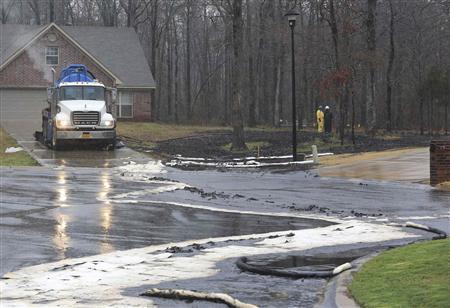 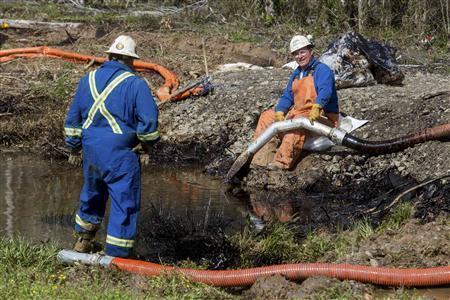 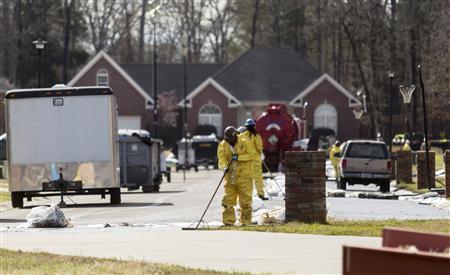 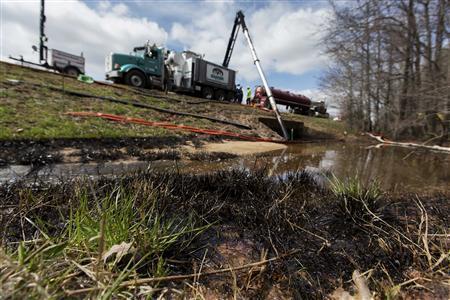 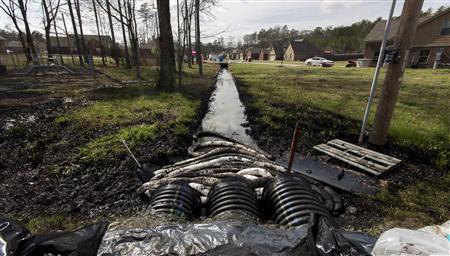 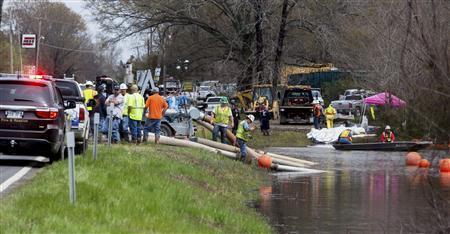 Exxon spokesman Alan Jeffers said on Sunday that crews had yet to excavate the area around the pipeline breach, a needed step before the company can estimate how long repairs will take and when the line might restart.

"I can't speculate on when it will happen," Jeffers said. "Excavation is necessary as part of an investigation to determine the cause of the incident."

Exxon's Pegasus pipeline, which can carry more than 90,000 barrels per day (bpd) of crude from Patoka, Illinois to Nederland, Texas, was shut after the leak was discovered late Friday afternoon in a subdivision near the town of Mayflower. The leak forced the evacuation of 22 homes.

Exxon also had no specific estimate of how much crude oil had spilled, but the company said 12,000 barrels of oil and water had been recovered - up from 4,500 barrels on Saturday. The company did not say how much of the total was oil and how much was water.

Allen Dodson, Faulkner County judge who is the top executive for the county where the spill occurred, told Reuters in an interview on Sunday that the smell of crude was less potent on Sunday as cleanup efforts continued, saying it was weaker than the smell of fresh asphalt laid on a road.

"The freestanding oil on the street has been removed. It's still damp with oil, it's tacky, like it is before we do an asphalt overlay," he said.

Exxon said it staged the response to handle 10,000 barrels of oil "to ensure adequate resources are in place."

Officials from the U.S. Environmental Protection Agency and the Department of Transportation's Pipeline and Hazardous Materials Safety Administration (PHMSA) also were on site to investigate the spill.

Fifteen vacuum trucks remained on the scene for cleanup, and 33 storage tanks were deployed to temporarily store the oil.

The pipeline was carrying Canadian Wabasca Heavy crude at the time of the leak. An oil spill of more than 1,000 barrels into a Wisconsin field from an Enbridge Inc pipeline last summer kept that line shuttered for around 11 days.

The 848-mile pipeline used to transport crude oil from Texas to Illinois. In 2006 Exxon reversed it to move crude from Illinois to Texas in response to growing Canadian oil production and the ability of U.S. Gulf Coast refineries to process heavy crude.

The Arkansas spill drew fast reaction from opponents of the 800,000 bpd Keystone XL pipeline, which also would carry heavy crude from Canada's tar sands to the Gulf Coast refining hub.

Environmentalists have expressed concerns about the impact of developing the oil sands and say the crude is more corrosive to pipelines than conventional oil. On Wednesday, a train carrying Canadian crude derailed in Minnesota, spilling 15,000 gallons of oil.

"Whether it's the proposed Keystone XL pipeline, or ... (the) mess in Arkansas, Americans are realizing that transporting large amounts of this corrosive and polluting fuel is a bad deal for American taxpayers and for our environment," said Representative Ed Markey, a Massachusetts Democrat.

Supporters of Keystone XL and oil sands development say the vast Canadian reserves can help drive down fuel costs in the United States. A report from the Canadian Energy Pipeline Association, put together by oil and gas consultancy Penspen, argued diluted bitumen is no more corrosive than other heavy crude.

A year ago Exxon won a court appeal to charge market rates on the Pegasus line, or rates that are not capped and that can change along with market conditions without prior approval from the Federal Energy Regulatory Commission.

That decision by the U.S. Court of Appeals in Washington D.C. said the Pegasus pipeline is now the "primary avenue" to move Canadian crude oil to the Gulf Coast. The ruling also said Exxon moves about 66,000 barrels per day on the line.

Last week PHMSA proposed that Exxon pay a $1.7 million fine over pipeline safety violations stemming from a July 2011 oil spill from its Silvertip pipeline in the Yellowstone River. The line, which carries 40,000 barrels per day in Montana, leaked about 1,500 barrels of crude after heavy flooding in the area.

Exxon has 30 days from the March 25 order to contest those violations.

According to PHMSA, the U.S. has 2.3 million miles of pipelines.

Exxon said that by 3 a.m. Saturday there was no additional oil spilling from the pipeline and that trucks had been brought in to assist with the cleanup. Images from local media showed crude oil snaking along a suburban street and spewed across lawns.

Twenty-two homes in the affected subdivision remained evacuated on Sunday, though Mayflower police were providing escorts for residents to temporarily return to retrieve personal items.

Jeffers said a couple of homes "appear to have small amounts of oil on their foundations," but he had no information on damage estimates or claims. Exxon had established a claims hotline for affected residents and said about 50 claims had been made so far.

Dodson said oil that made it to the street went into storm drains that eventually lead to a cove connected to nearby Lake Conway, known as a fishing lake stocked with bass, catfish, bream and crappie.

He said local responders that included firemen, city employees, county road crews, police quickly built dikes of dirt and rock to block culverts along that path that stopped crude from fouling the lake.

"We were just in the nick of time," he said.

Exxon later deployed 3,600 feet of boom near the lake as a precaution.

Dodson said crude also got into several homeowners' yards, which will take longer to clean up.

"We've just gotten used to having pipelines go through cities and counties, and you hope something like this doesn't happen. My heart goes out to all of the people personally impacted," Dodson said.