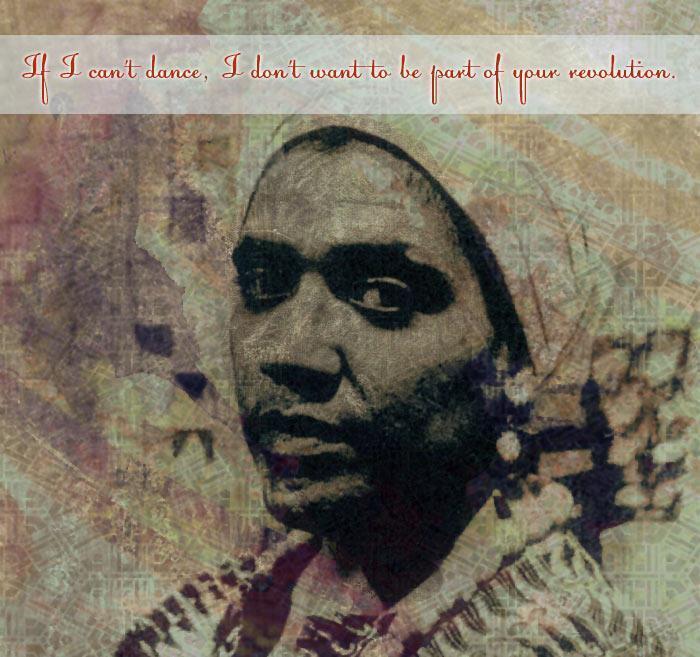 As women, we have come to distrust that power which rises from our deepest and nonrational knowledge. We have been warned against it all our lives by the male world, which values this depth of feeling enough to keep women around in order to exercise it in the service of men, but which fears this same depth too much to examine the possibilities of it within themselves. So women are maintained at a distant/ inferior position to be psychically milked, much the same way ants maintain colonies of aphids to provide a life-giving substance for their masters.

It is never easy to demand the most from ourselves, from our lives, from our work. To encourage excellence is to go beyond the encouraged mediocrity of our society. But giving in to the fear of feeling and working to capacity is a luxury only the unintentional can afford, and the unintentional are those who do not wish to guide their own destinies.

As women, we need to examine the ways in which our world can be truly different. I am speaking here of the necessity for reassessing the quality of all the aspects of our lives and of our work, and of how we move toward and through them.

There are frequent attempts to equate porn(‘graphy and eroticism, two diametrically opposed uses of the sexual. Because of these attempts, it has become fashionable to separate the spiritual (psychic and emotional) from the political, to see them as contradictory or antithetical. “What do you mean, a poetic revolutionary, a meditating gun-runner?” the same way, we have attempted to separate the spiritual and the erotic, thereby reducing the spiritual to a world of flattened affect, a world of the ascetic who aspires to feel nothing. But nothing is farther from the truth. For the ascetic position is one of the highest fear, the gravest immobility. The severe abstinence of the ascetic becomes the ruling obsession. And it is one not of self-discipline but of self-abnegation.

That self-connection shared is a measure of the joy which I know myself to be capable of feeling, a reminder of my capacity for feeling. And that deep and irreplaceable knowledge of my capacity for joy comes to demand from all of my life that it be lived within the knowledge that such satisfaction is possible, and does not have to be called marriage, nor god, nor an afterlife.

During World War II, we bought sealed plastic packets of white, uncolored margarine, with a tiny, intense pellet of yellow coloring perched like a topaz just inside the clear skin of the bag. We would leave the margarine out for a while to soften, and then we would pinch the little pellet to break it inside the bag, releasing the rich yellowness into the soft pale mass of margarine. Then taking it carefully between our fingers, we would knead it gently back and forth, over and over, until the color had spread throughout the whole pound bag of margarine, thoroughly coloring it.

WE HAVE BEEN RAISED TO FEAR THE yes within ourselves, our deepest cravings. But, once recognized, those which do not enhance our future lose their power and can be altered. The fear of our desires keeps them suspect and indiscriminately powerful, for to suppress any truth is to give it strength beyond endurance. The fear that we cannot grow beyond whatever distortions we may find within ourselves keeps us docile and loyal and obedient, externally defined, and leads us to accept many facets of our oppression as women.

And yes, there is a hierarchy. There is a difference between painting a back fence and writing a poem, but only one of quantity. And there is, for me, no difference-between writing a good poem and moving into sunlight against the body of a woman I love.

For not only do we touch our most profoundly creative source, but we do that which is female and self-affirming in the face of a racist, patriarchal, and anti-erotic society.

Black lesbian feminist Audre Lorde is the author of numerous books of poetry and essays. She is an outspoken critic of racism, sexism, classism, and other systems of domination, as well as a prolific creator of nest, cultural possibilities. This essay was originally delivered as a speech in 1978 at the Fourth Berkshire Conference on the History of Women, Mount Holyoke College, and has become a feminist classic of sorts.