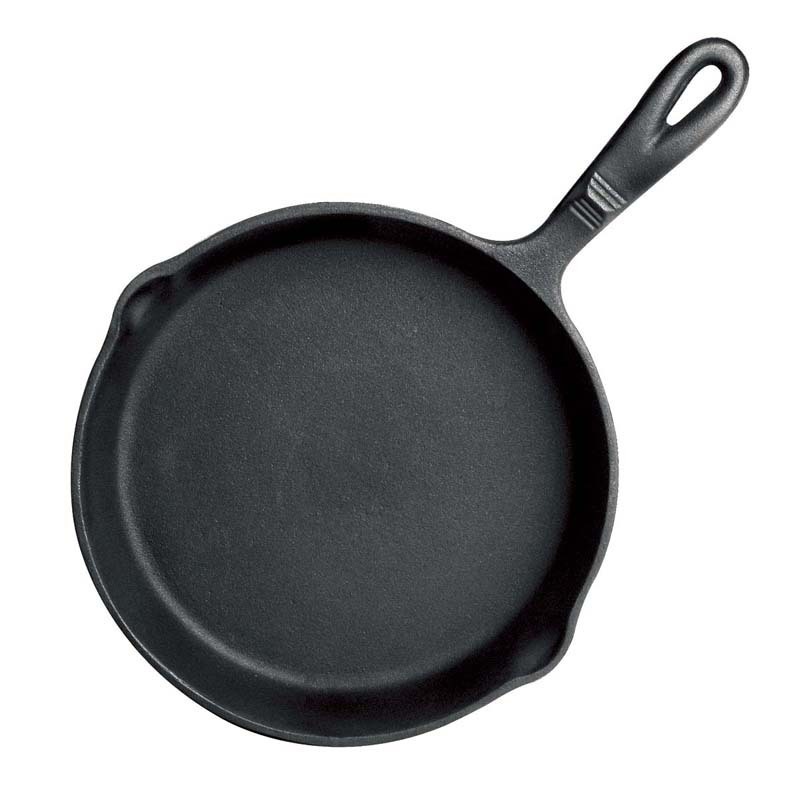 The post after this one on “black rust” describes why you should heat the pan before applying oil for seasoning. This helps the seasoning to adhere and makes the pan pleasantly black.

In a previous post, I illustrated how I cleaned and reseasoned an antique cast iron popover pan. This was my first attempt, and my seasoning technique was somewhat haphazard because I couldn’t find consistent, science-based advice. I used a combination of organic avocado oil and strained drippings from organic bacon. This worked pretty well on the popover pan, which doesn’t have a polished surface. But the smooth inner surface of a skillet showed an unevenness of color and texture, and the seasoning wasn’t hard enough. It was too easily marred by cooking utensils or scraping against oven racks.

I wanted to understand the chemistry behind seasoning so I’d know how to fix this, but there is nothing that addresses this issue directly. A Web page on cast iron posted by someone similarly obsessed with the science gave me two crucial clues, the phrases “polymerized fat” and “drying oil”. From there I was able to find the relevant scientific literature and put the pieces together.

The pictures below are both of the same antique cast iron skillet. The “before” close-up on the left is from a picture of the skillet in my previous blog post on making German Pancakes. I stripped the pan with oven cleaner and reseasoned it based on my new understanding. The “after” close-up on the right shows the result.

Start With the Right Oil (It’s Not What You Think)

I’ve read dozens of Web pages on how to season cast iron, and there is no consensus in the advice. Some say vegetable oils leave a sticky surface and to only use lard. Some say animal fat gives a surface that is too soft and to only use vegetable oils. Some say corn oil is the only fat to use, or Crisco, or olive oil. Some recommend bacon drippings since lard is no longer readily available. Some say you must use a saturated fat – that is, a fat that is solid at room temperature, whether it’s animal or vegetable (palm oil, coconut oil, Crisco, lard). Some say never use butter. Some say butter is fine. Some swear by Pam (spray-on canola oil with additives). Some say the additives in Pam leave a residue at high temperatures and pure canola oil is best. Some say it doesn’t matter what oil you use.

They are all wrong. It does matter what oil you use, and the oil that gives the best results is not in this list. So what is it? Here are some hints: What oil do artists mix with pigment for a high quality oil paint that dries hard and glassy on the canvas? What oil is commonly used by woodturners to give their sculptures a protective, soft-sheen finish? It’s the same oil. Now what is the food-grade equivalent of this oil?

The oil used by artists and woodturners is linseed oil. The food-grade equivalent is called flaxseed oil. This oil is ideal for seasoning cast iron for the same reason it’s an ideal base for oil paint and wood finishes. It’s a “drying oil”, which means it can transform into a hard, tough film. This doesn’t happen through “drying” in the sense of losing moisture through evaporation. The term is actually a misnomer. The transformation is through a chemical process called “polymerization”.

As a reality check of this theory, I googled “season cast iron with flaxseed oil” to see what came up. The very first hit is a page written by a guy who seasons his cast iron cookware with linseed oil from the hardware store because it gives the hardest surface of anything he’s tried. (I’m not sure how safe that is; I don’t recommend it.) Below that were several sites selling traditional cast iron cookware from China, which they advertise as being “preseasoned with high quality flax oil”. I don’t know whether they really use food-grade flaxseed oil (which is expensive) or linseed oil from a hardware store. What’s significant is the claim. Seasoning with high quality flaxseed oil is something to brag about.

With this encouragement, I stripped one of my skillets and reseasoned it with flaxseed oil. As you can see in the picture above, the result was a dramatic improvement. The finish is smooth, hard, and evenly colored.

The first time I seasoned a pan I chose avocado oil because it’s monounsaturated and doesn’t easily go rancid. It also has the highest smoke point of any edible oil, 520°F, so I could heat it in a 450°F oven without passing the smoke point. I knew that when cooking, you should never heat an oil past its smoke point because that causes the release of “free radicals”, which are carcinogenic. I was careful not to choose a polyunsaturated oil – and especially not an oil high in omega-3 fatty acids – because these are especially vulnerable to breakdown with heat and the release of free radicals.

Ironically, it’s for exactly these reasons that the best oil for seasoning cast iron is an oil high in omega-3 fatty acids – in particular, alpha-linolenic acid (ALA). Free radicals are actually what enable the polymerization. Drying oils, which produce the hardest polymers, are characterized by high levels of polyunsaturated fatty acids, especially the omega-3 fatty acid ALA.

The lard that was traditionally used for seasoning 100 years ago was much higher in ALA than fat from pigs today, because back then pigs ate their natural diet. Today they are raised on industrial feedlots and forced to eat grain, making their fat low in omega-3s.

Since lard is traditional but no longer readily available, many people substitute bacon drippings, but this is a bad idea. If it’s conventional bacon, you’re baking in carcinogenic nitrates. But even organic bacon is not good for an initial seasoning because it’s filled with salt.

The reason that Pam seems to work well in seasoning is that its main ingredient is canola oil, which is relatively high in ALA (10%), making it a “semi-drying oil”. Flaxseed oil, a drying oil, is 57% ALA. But it’s not a good idea to use a spray oil, no matter what oil it’s made with, because of its additives. You’re doing chemistry here. If you want good results, use pure ingredients.

Fat polymerization can be triggered or accelerated in a variety of ways. As best I can tell from my reading, the cast iron seasoning process is an example of “radical polymerization”. The process is initiated when something causes the release of free radicals in the oil. The free radicals then “crosslink” to form the tough, hard film you see in a well-seasoned pan.

I haven’t defined “free radical” or “crosslink” because that gets into details of chemistry that you don’t need to understand to season a cast iron pan. All you need to know is that the molecular structure of the oil changes and becomes something else, something tough and solid. The process is initiated with the release of free radicals, which then become crosslinked, creating a hard surface.

Free radicals are carcinogenic inside your body, and also a cause of aging. So don’t ever heat oil you’re going to eat above its smoke point. If the oil starts to smoke, toss it out and start again. When you’re seasoning a pan, you’re not cooking food. By the time the seasoned pan comes out of the oven, there are no more free radicals.

The basic idea is this: Smear a food-grade drying oil onto a cast iron pan, and then bake it above the oil’s smoke point. This will initiate the release of free radicals and polymerization. The more drying the oil, the harder the polymer. So start with the right oil.

Go to your local health food store or organic grocery and buy a bottle of flaxseed oil. It’s sold as an omega-3 supplement and it’s in the refrigeration section because it goes rancid so easily. Check the expiration date to make sure it’s not already rancid. Buy an organic flaxseed oil. You don’t want to burn toxic chemicals into your cookware to leach out forever more. It’s a fairly expensive oil. I paid $17 for a 17 ounce bottle of cold-pressed, unrefined, organic flaxseed oil. As it says on the bottle, shake it before you use it.

Strip your pan down to the iron using the techniques I describe in my popover post. Heat the pan in a 200°F oven to be sure it’s bone dry and to open the pores of the iron a little. Then put it on a paper towel, pour a little flaxseed oil on it (don’t forget to shake the bottle), and rub the oil all over the pan with your hands, making sure to get into every nook and cranny. Your hands and the pan will be nice and oily.

Now rub it all off. Yup – all. All. Rub it off with paper towels or a cotton cloth until it looks like there is nothing left on the surface. There actually is oil left on the surface, it’s just very thin. The pan should look dry, not glistening with oil. Put the pan upside down in a cold oven. Most instructions say to put aluminum foil under it to catch any drips, but if your oil coating is as thin as it should be, there won’t be any drips.

Turn the oven to a baking temperature of 500°F (or as high as your oven goes – mine only goes to 450°F) and let the pan preheat with the oven. When it reaches temperature, set the timer for an hour. After an hour, turn off the oven but do not open the oven door. Let it cool off with the pan inside for two hours, at which point it’s cool enough to handle.

The pan will come out of the oven a little darker, but matte in texture – not the semi-gloss you’re aiming for. It needs more coats. In fact, it needs at least six coats. So again rub on the oil, wipe it off, put it in the cold oven, let it preheat, bake for an hour, and let it cool in the oven for two hours. The picture above was taken after six coats of seasoning. At that point it starts to develop a bit of a sheen and the pan is ready for use.

The reason for the very hot oven is to be sure the temperature is above the oil’s smoke point, and to maximally accelerate the release of free radicals. Unrefined flaxseed oil actually has the lowest smoke point of any oil (see this table). But the higher the temperature the more it will smoke, and that’s good for seasoning (though bad for eating – do not let oils smoke during cooking).

I mentioned earlier there’s a myth floating around that vegetable oils leave a sticky residue. If the pan comes out of the oven sticky, the cause is one of three things:

It’s possible to use a suboptimal oil for seasoning, like Crisco or bacon drippings, and still end up with a usable pan. Many (most) people do this. But the seasoning will be relatively soft, not as nonstick, and will tend to wear off. If you want the hardest, slickest seasoning possible, use the right oil: flaxseed oil.