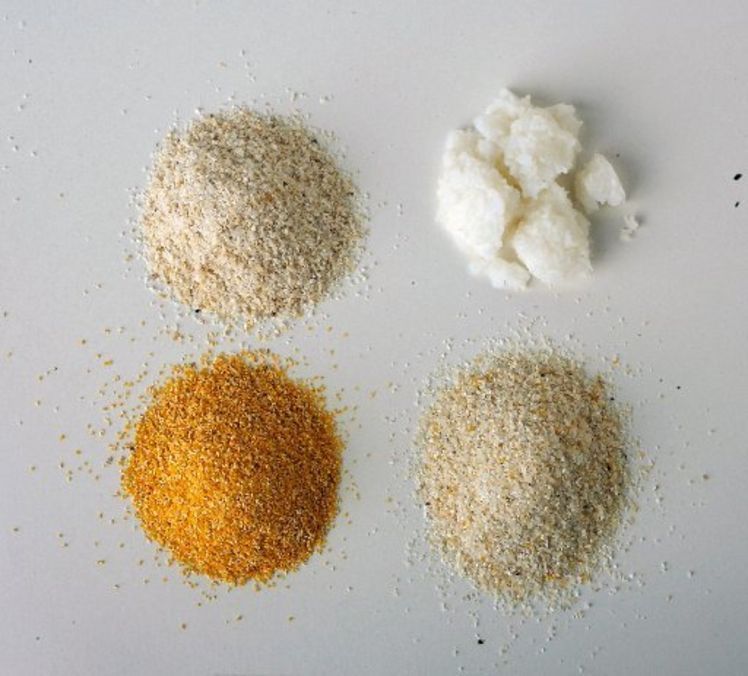 Different kinds of grits, including stone ground, yellow and white

People not from the South do not understand or appreciate grits. I'm sure many of you have had the experience of requesting grits for breakfast at a restaurant NOT in the South, and having the server look at you like you came from Mars.

Then there are those people "from away" who tell you they've had grits, but they've showered sugar on them like they do cereal. There are others who just can't believe grits are made from corn. Everyone in the South knows (or should know) that hominy and grits are products made from hard (mature) hard kernels. Whole corn kernels are soaked in a solution of water and lye to remove the outer hulls, to become hominy. Hominy, when dried, can then be coarsely ground, and voila! You have grits.

I remember reading, in the 1960s, a piece in the New York Times that said grits had fallen into disfavor and that they were considered a poor man's food. Well, up until the late 1950s crawfish was considered a poor man's food, and we know how that has changed. There was a time a 40-pound sack of live crawfish cost about $40. Recently I saw a sign offering a 40-pound sack for $200. I almost drove my car off the road!

Anyway, back to my grits. When Jimmy Carter was in the White House, grits enjoyed almost a cult status, but as soon as he was out of office, consumption when down.

Grits have always been popular in my kitchen. I cannot serve grillades with rice, right? And when I want a big girl breakfast on the weekend, there is always a bowl of creamy grits floating in butter. One of my favorite week-night suppers is fresh pork sausage served with cheesy grits and a side of spinach wilted in the sausage grease. YUM! My husband refuses to eat smothered pork chops (one of his favorites) without a big glob of buttery grits spiked with roasted garlic. If there are any grits left, we spread them out on a sheet pan, chill and make grit cakes topped with poached eggs for breakfast the next day.

If you've done any traveling in the southern states, you probably enjoyed shrimp and grits, popular in the Carolinas and Georgia. In the Florida Keys, as well as the sea islands of Georgia, the locals enjoy grits and grunts -- grunts being any number of small pan fish.

The grits you usually find in the supermarket are either quick grits or the instant kind. Stone-ground grits have also become popular in the South. They take a little longer to prepare, and they do have a distinctive flavor. If you've ever cooked grits, you know that they need butter and salt, gravy or cheese to make a delicious dish.

I think grits are making a big comeback and perhaps you might want to get on the bandwagon with a few recipes from my repertoire.

After the grits are cooked, add the eggs, cheese, milk and butter and stir until all is blended and the cheese and butter are completely melted. Pour into a 2-quart baking dish and bake at 350 degrees for about 30 minutes or until the mixture sets slightly.

If you like, substitute spinach for the turnip greens.

Preheat the oven to 350 degrees. Butter a one-quart soufflé dish or casserole and then sprinkle it with the breadcrumbs to coat the bottom and sides.

In a saucepan, bring the water, milk and salt to a gentle boil and stir in the grits. Return the mixture to a boil, stirring constantly. Reduce the heat and simmer, stirring often, until thick, four to five minutes. Remove from the heat and add one-half cup of the cheese, the butter, half-and-half, the pepper and garlic.

In a bowl, lightly beat the egg yolks. Stir into the grits and stir until the cheese and butter are melted. Let cool for 10 minutes.

In one-half cup boiling, salted water, blanch the turnip greens. Remove from the heat and drain. Squeeze dry. Mix the greens with the bacon grease and spread on the bottom of the prepared baking dish in an even layer. Sprinkle with the remaining cheese.

In another bowl, beat the egg whites until stiff. Gently fold the egg whites into the grits mixture. Pour the mixture over the cheese and smooth the top with a spatula. Bake until puffed and browned, 40 to 45 minutes. Serve immediately.

This next recipe is one I enjoy when I visit the Bergeron's bed and breakfast, Pleasant Hill in Natchez.

Remove the sausage from the casing and crumble. Cook in a skillet until all pink has disappeared. Drain on paper towels and then spread the sausage on the bottom of a lightly greased 9- by- 13-inch baking pan.

Combine the eggs, 2 cups of the cheese, the butter and cayenne pepper. Season with salt to taste. Gradually add the egg mixture to the cooked grits and pour over the sausage. Top with minced garlic and the remaining cup of cheese. Bake at 350 degrees until hot and bubbly, 20 to 30 minutes. Let stand for 5 minutes before serving.