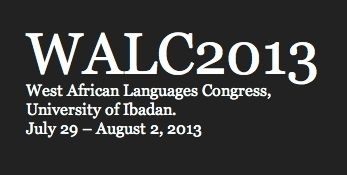 Despite years of scholarly research a large percentage of the indigenous languages of West Africa have not been documented. Several of the languages are at the risk of being lost. Greater attention to diversity, environment and sustainability in the global discourse has not reflected much in terms of support for and development of indigenous languages. Although there is a heightened sense of activities and activism for language documentation, there has been no commensurate attention to the very important aspects of description, development, modernization and integration of local (West African) languages with global information infrastructure. This appears to be leading us once more to the ideological issue of resource exploitation. The critical question remains, how do we make West African Languages relevant and work for those who speak them? We are once more forced to rethink the role of the linguist and interrogate West African Languages Curricula in the face of emerging realities. The task of language documentation is particularly necessary so as to plan the future with the past, since information/ facts derived from such efforts can have positive impact on current and future linguistic endeavours.

The aim of the conference is to explore the different perspectives from which language studies reflects or impacts on the different aspects of human endeavour. In addition it seeks to foreground the various areas in which language and linguistics interface with diverse capacities and disciplines. Given the current realities of modern human life it seems increasingly compelling for Linguists to find common grounds with other disciplines while emphasizing language as a core human capacity. The conference brings together researchers and students in the various fields of language studies as well as aspects of professional life in which indigenous languages play a part. This is expected to motivate an exchange of ideas and promote discussions of, progress in and development of these areas in West African languages. We hope that through the conference participants will be able to consider the issue of sustainability in research and practice.
The sub themes of the conference include (but are not limited to):

Participants are invited to submit abstracts dealing with any of the sub themes and other related areas. They can be up to a maximum of 300 words long. It must be typed in a 12– point font and in both word and pdf file formats. Deadline for the submission of abstracts has been extended from 31 March, 2013 to 30 May, 2013.

Individuals and organizations who would like to present demos and organise workshops/special events should contact the LOC Secretary, Dr Oye Taiwo, Department of Linguistics and African Languages, University of Ibadan, Ibadan, Nigeria through the e- mail address: oyepaultaiwo@gmail.com.