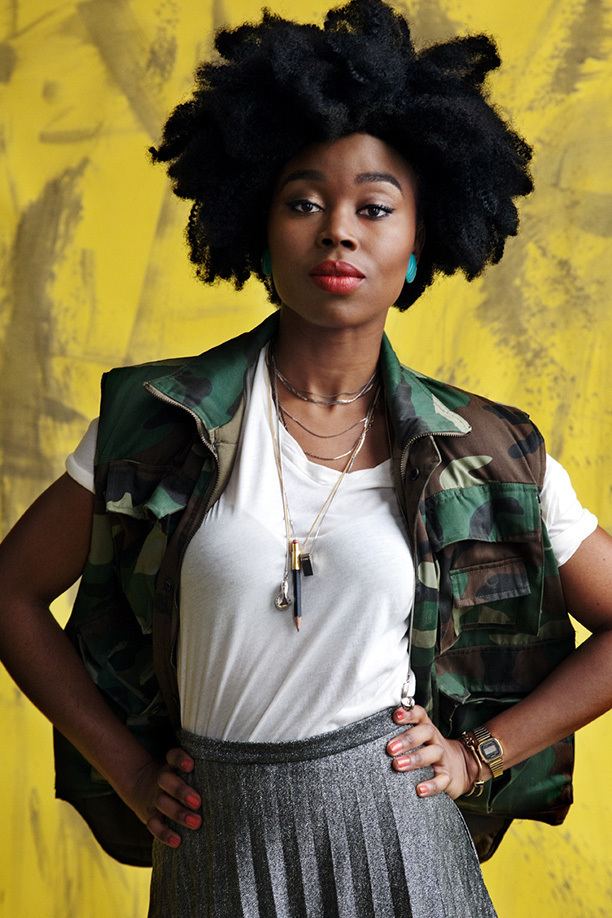 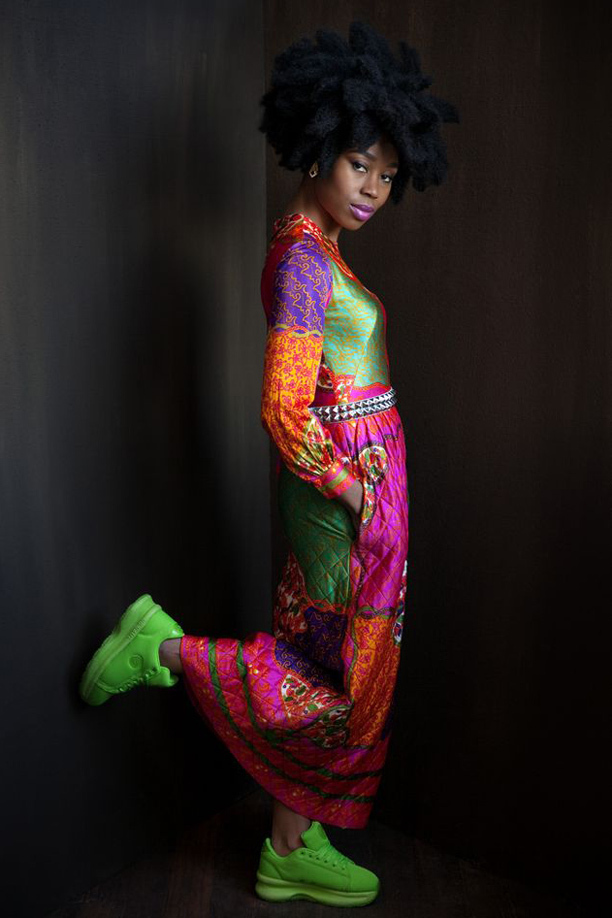 'At the back of beyond'

Ntjam Rosie just loved the saying ‘At the back of beyond’ used in the movie Black Narcissus and named her album after it. ‘A place difficult to get to,’ it means. But it is not difficult at all to love ‘At the back of beyond’: it is uplifting, bright and authentic.  The previous album ‘Elle’ (2010) made Ntjam Rosie the rising star of the jazz charts. ‘At the back of beyond’ is different. Rosie says. “My new album is more involved. It takes you on a spiritual trip. It is about good and bad, about body and soul, and about finding the balance. It takes you out of your comfort zone and makes you feel part of the music.”

Ntjam Rosie wanted to move closer and be more intimate than before. She wanted a new tool that allowed her more freedom than the piano did. A problem was that she didn’t play another instrument. “For my new album I needed the guitar to express what I am working on. It is direct, open and simply blissful: a new chapter.” One sunny day little more than a year ago she set herself to learning the guitar. Rosie took some lessons with one of her band members - ‘just to know what you write’ - and then taught herself day by day until she could play the instrument more intuitively. “It is as if the guitar is talking to me, with the piano that happens differently. I liked the challenge to write with guitar, it was more difficult but it opened up a new way to express myself.”

‘Elle’ told stories about other people’s lives. Ntjam Rosie was describing the world but not so much being a part of it. ‘At the back of beyond’ is a journey within. Together with her first album Atouba (2008, Appletree Records) this threesome is an adventurous musical trip.  The songs on ‘At the back of beyond’ invite you to sing along to when you hear them. She blames it on turning 30: “For many people that is an age of transition, to me it means that I am more outgoing and that I am showing the world who I am. I want to show my love for God, people and all things that He created. I am a spiritual person and of course that reflects in my music.”

“It’s what you get when I pick up the guitar!”
‘At the back of beyond’ is a very personal album. It is about keeping the faith, about moving on even if the going gets tough. “And it gets tough. But I have good friends and loyal supporters.” Ntjam Rosie smiles. She is a brave woman quite unafraid of showing her true nature. She explains how she shared her guitar learning journey with her friends on YouTube. “The funny thing is that my first public performance on the guitar was on national television.” It still makes her laugh. “And it was all right! I wanted to discover a new musical space and show people that if you put your mind to it, you can do almost anything. With every step I take, I am getting closer to who I am, to what my story is.”

Gentle Daze Records
Ntjam Rosie has her own record label Gentle Daze Records and works hard for it. I run my own label with the support of a great team. Almost all songs on ‘At the Back of Beyond’ she has written herself, the album is a co-production with Alexander van Popta. She is a self-made woman in every sense of the way. “To seriously run my own label I need to invest a lot of time in my company.”

‘Elle’ brought her to several countries, among them Thailand, Turkey, Estonia and China and earned her a prestigious Edison nomination. “The critics have been fabulous.” Ntjam Rosie is regularly invited to perform for DWDD on Dutch TV and has been on BBC 1 radio; she has been on an extensive Club Tour and has played at the North Sea Jazz Festival.

Is her life all about music? “If I had not become a musician I would be a photographer! “Ntjam Rosie is especially fond of close-up nature photography that shows the form and rhythm of nature and especially plants.

Ntjam Rosie has flair and a unique personal style. She has been nominated for the magazine ELLE Personal Style Awards but doesn’t see herself as a fashion diva. “I have often been portrayed as a diva, now it is time to show my true colors. And those colors are vibrant and clear.” The new album is no reprise of Elle. ‘At the back of beyond’ is an extrovert and new addition to Ntjam Rosie’s beautiful and adventurous repertoire. 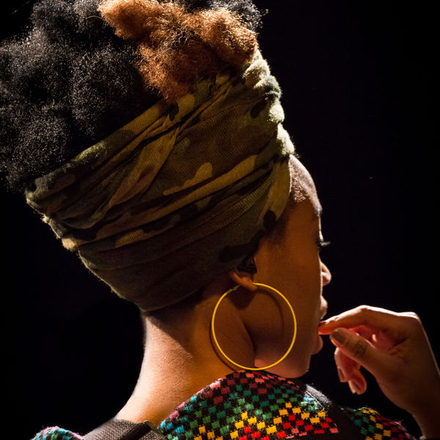 ‘Some dreams can’t be denied’
Ntjam Rosie has style, great looks and is a gifted musician, singer, songwriter and producer. The 29 year old emphasizes: “I am an artist. I dig into my cultures and make art from them.” It is the ‘right here, right now’ quality of her compositions that makes her music so exciting. She does not indulge in retro elements but simply roots in them. Her songs are an enticing mix of lyrics, style, and music.

Ntjam Rosie lives in Rotterdam now. She was born in the village Sonkoe in the South of Cameroon. When she was nine years old her mother married and moved from Cameroon to the Dutch town of Maastricht. Ntjam Rosie grew up dancing and singing to pop music in her spare time. After high school she auditioned at Codarts academy of music in Rotterdam but was rejected at first. She felt insufficient and decided to study something else instead.

But some dreams cannot be denied. 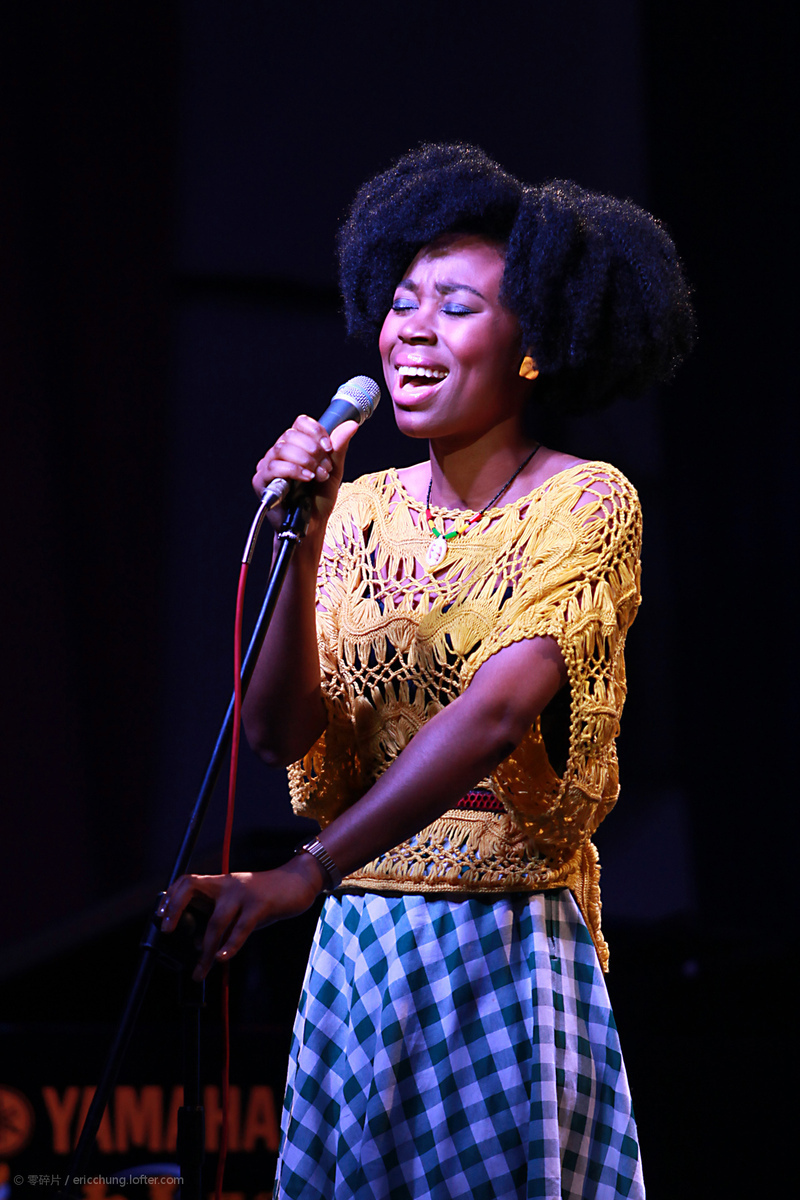 Aged 19 she took a life changing decision: against all advice she quit studying. She found a job, joined a band and took up singing lessons. She was scared all the way: “to choose for your passion is one thing, – but what if passion doesn’t choose you? I knew I had it in me, it is my calling. But I was the only one who seemed to know.”

The years at the Codarts academy were to become some of the hardest in her life. “I had an attitude and thought I knew it all, when in fact nothing I did was good enough. One crucial day they gave me an ultimatum.” She had two weeks for improvement or she would have to leave Codarts. The idea of being thrown out of school still makes her shudder. In those two weeks she fell to ashes but then rose with a new stunningly different attitude. Beneath all the pressure and despair she had found a calm spot.
‘The heart of the storm,’ she calls it.

In those two weeks she found a solid base on which her talent could grow en develop. She had let go of pretence and that enabled her to show her true beauty. Today she is grateful to Codarts and her strict teachers. “They prepared me for what was to come,” she says. “The music industry is tough and critics are harsh. I deal with them like I did with my teachers. They are only doing their job, sometimes they’re right, sometimes they’re not.”