The War We Are Living 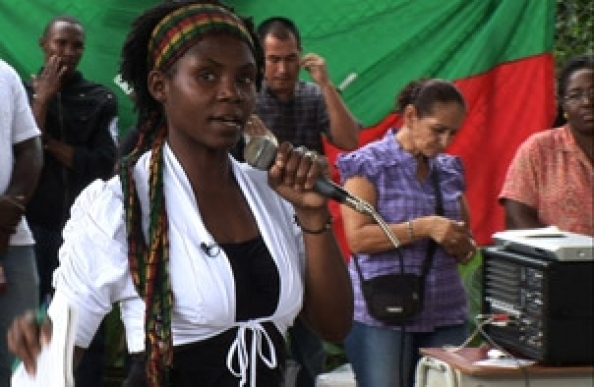 If you ask Colombia’s city dwellers and governing political class, they’ll tell you the country’s 40-year-old civil war is over. But The War We Are Living reveals the “other” Colombia, in rural areas far away from the capital, where the war is all too real – and now the battle is over gold. In Cauca, a mountainous region in Colombia’s Pacific southwest, two extraordinary Afro-Colombian women are fighting to hold onto the gold-rich land that has sustained their community through small-scale mining for centuries. Clemencia Carabali and Francia Marquez are part of a powerful network of female leaders who found that in wartime women can organize more freely than men. As they defy paramilitary death threats and insist on staying on their land, Carabali and Marquez are standing up for a generation of Colombians who have been terrorized and forcibly displaced as a deliberate strategy of war. If they lose the battle, they and thousands of their neighbors will join Colombia’s 4 million people – most of them women and children – who have been uprooted from their homes and livelihoods. Narrated by Alfre Woodard.

Credits for The War We Are Living

I Came to Testify
The moving story of how a group of 16 women who had been imprisoned and raped by Serb-led forces in the Bosnian town of Foca broke history’s great silence – and stepped forward to take the witness stand in an international court of law.
Pray the Devil Back to Hell
The astonishing story of the Liberian women who took on the warlords and regime of dictator Charles Taylor in the midst of a brutal civil war.
Peace Unveiled
Three women in Afghanistan are risking their lives to make sure women’s rights don’t get traded away in peace negotiations with the Taliban.
War Redefined
The capstone of Women, War & Peace challenges the conventional wisdom that war and peace are men’s domain through incisive interviews with leading thinkers, Secretaries of State and seasoned survivors of war and peace-making.